It was the final sprint. The final presentation was past, and in the remaining two weeks until the delivery date, I focused on fixing the most crucial bugs, and improve the UX a bit more.

I finished replacing all remaining inital test audio and visual assets. I now have the rights to use every asset in the game, so I could theoretically sell it. In order to do this I had to make my own UI backgrounds in paint.net, and replace some of the good sound effects with public domain or CC-licensed sounds that didn’t sound quite as good. I updated the Credits text accordingly.

I finally dealt with the bugs that could break builders, and also improved the job manager some more. There many other bugs and issues I fixed, but these were the most impacting ones.

There had been a few bugs and issues plaguing my builders for a while. Destroying their currently targeted construction site would get them stuck in a behaviour, and they wouldn’t ever leave a construction site until it was completed, even if they were starving. I fixed these two Issues.

Also, multiple builders can work on the same building now.
I changed the code from a weird timer-based system, to one that is based on “hits”. For example the warehouse takes 60 “hits” to complete, so a builder must “hit” the building with their hammer 60 times to finish it. Two builders can complete it twice as fast, and additional builders increase it even more.

I finally implemented job priorities.
I had them in the code from the very beginning, but never actually used them in the job finding process. Now, Serfs will try to pick the job with the highest priority.
Priority is the sum of three factors:

Implementing this fixed a few issues, such as citizens starving to death, even if there is plenty of food in the warehouse.

I implemented the Quarry, the Gold-, Iron-, and Coalmines, the Ironsmeltery and the Mint, as well as their respective citizens, and the harvestable objects (Granite, Gold, Iron, Coal deposits). Implementing these required some changes in how I handle harvesting a resource, since these new ones have more than one item to harvest.

This change finally led me to decide to implement a UI for harvesting objects, which was also much requested by playtesters.

It is now possible to “win” the game. I implemented the Palace, a building with extremely high construction costs, that requires all items at the end of resource chains to build. Completing the construction will give the player a win screen. Afterwards it will still act as a “moneysink”, as it has stockpiles for Iron and Handaxes, creating a place for these two items to go, besides the warehouse. 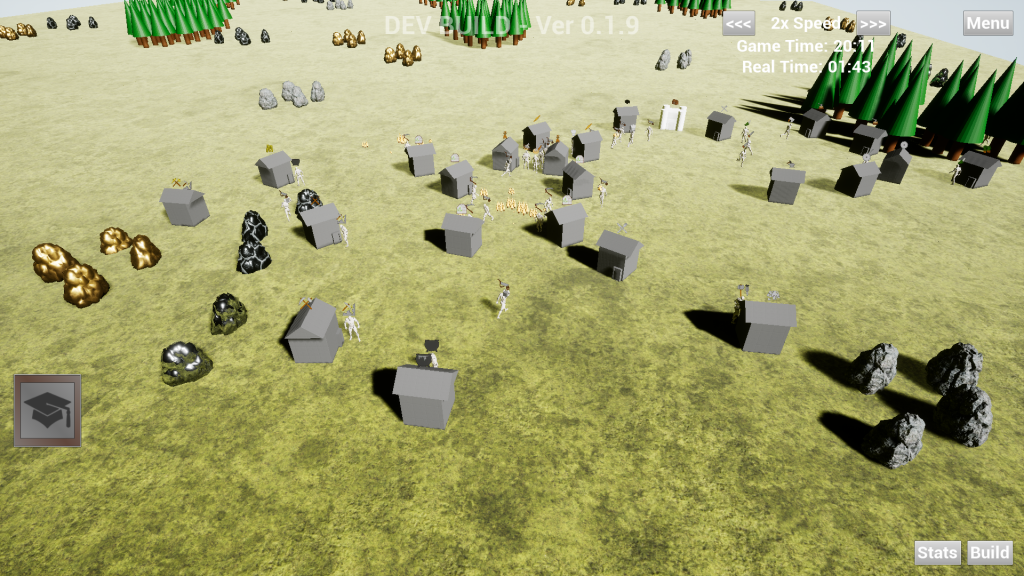 State of the game on February 16th 2018. You can see all the different types of rocks (gold, coal, iron, granite) and some of the new professions and Icons.