I was on vacation for the week before Christmas, and then over Christmas and New Year I didn’t get much work done either (or any really), but now I’ve finally started working on the level design again. Patrick had made a first draft of an intro/tutorial level, so I decided to start off  fleshing that out, and then working on a first level.

I started by writing down how I would imagine the level, leaving all sorts of gaps and questions about how exactly I would do it:

Then I started drawing it, even if my drawing skills are terrible, because I thought it would help me to give it exact dimensions instead of rough ideas, which it did!

I used PaintDotNet, a tool that is somewhere inbetween MSPaint and Gimp in terms of power, but easy to use and enough for me anyways. I started drawing the exit of the level, then slowly drew the cave larger so there is room for the box and the lever to the left. I drew in a cross that shows the (rough) screen dimensions and moved it around the level to make sure that the starting screen shows the full controls, and the exit. Then I moved it further to make sure that the player can see the box drop from the claw when they interact with the lever.

I used some different colors, and intend to keep that color scheme for later level mockups, to help seeing the important things in the level.

Before working on the first level, I did some research on puzzle games (again), and learnt from one video, that “a puzzle has to make the player stop and think”. According to this video, the right order of events is “player sees obstacle > player thinks about > player finds a solution”. Although this should be obvious, I hadn’t thought about that yet, so now I had something to keep in mind!

So revisited the first level that we had started thinking about before, which was not much more than “gumball rolling down a slope to break through a wall, after that something with Mentos and a Cola lake”. I now realized that just triggering the gumball machine and the gumball breaking through the wall would be no puzzle, because all the player did was interact with everything they can, instead of thinking about what it is that they’re doing. I went back to writing things down before drawing again, because that worked pretty well for the first level.

After that I started drawing. I took the intro level file, and took the screen dimensions from it. Using those I drew a cave entrance, a bit lower than the screenheight. I drew a “brittle wall” in it which would have to be broken by the gumball later, and then made a connection to the intro level. For now I just drew some slopes up, and put a gumball machine at the end, but I will work with the rest of the team on monday to finalize the level designs. 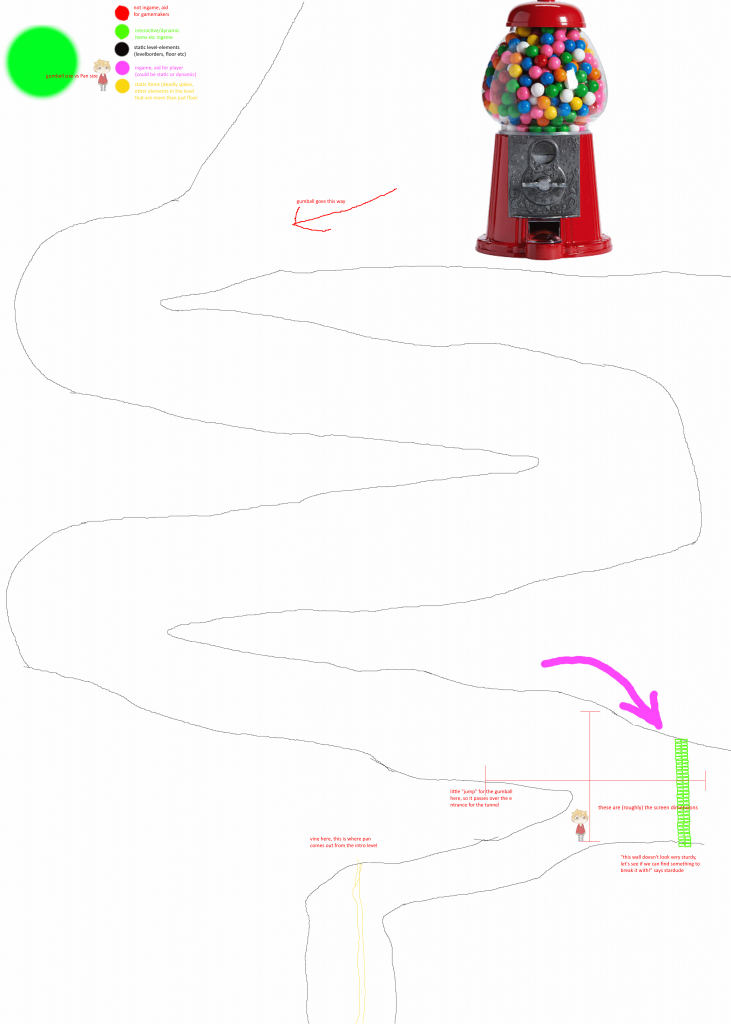