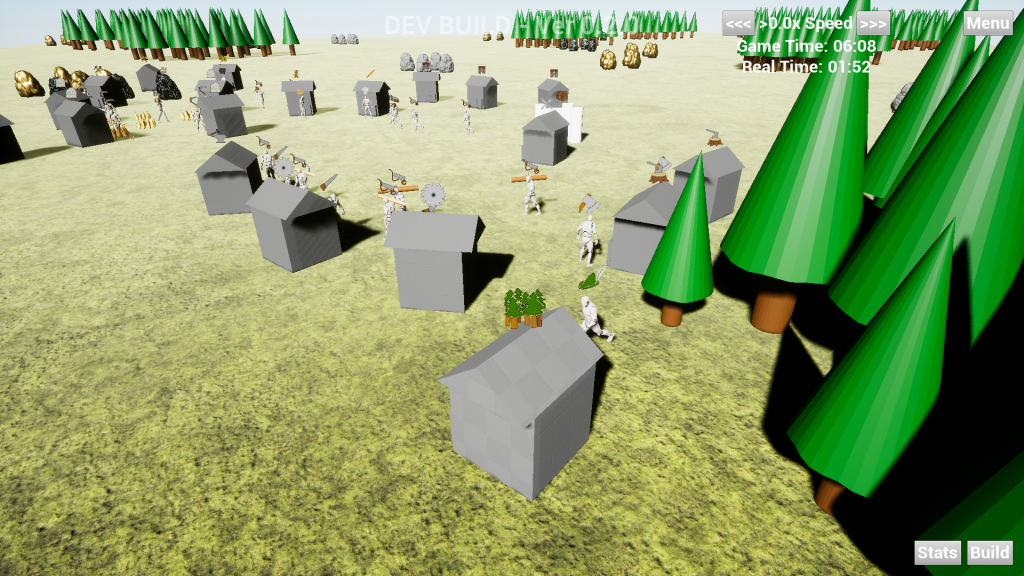 Burghers is a 3D real-time city building game set in the medieval era. The player is the leader of a new settlement, and as such, aims to grow the settlement’s population and wealth.
It is a direct continuation of Warriors and Serfs, but with different design goals. Where Warriors and Serfs was always intended to have combat as integral part of gameplay, Burghers is about the citizens. The design goal for the game was to make the citizens interesting (memorable) through randomly generated properties.

The written part of the thesis explored methods of making that happen, and proposes a list of possible features to implement. In order to create the list I analysed recent games as well as other media.

I am very satisfied with my work on the written part of the thesis. I gathered an interesting collection of properties that have shown to be effective in other games.

I’m not entirely satisfied with the progress of Burghers, however. At the beginning of the three-month period I had for the thesis, I decided to fix some of the technical debt that resulted from the dirty fixes I made in Warriors and Serfs. I greatly improved a lot of the architecture for implementing new items, buildings or types of citizens, however doing so took me around three weeks. These improvements made no direct difference to the player, and in the remaining time, I could hardly make use of the improved development flow.
The final result is that Burghers doesn’t feel much different from Warriors and Serfs, and citizens are hardly more memorable. Instead of focussing on improving for the long term, I should’ve focussed on the immediate goals at hand – making the citizens more interesting. I wrote more about this in the Documentation about Burghers, which is part of the Bachelor Thesis.